This article is the second part of a piece by Marc Rameaux about modern agriculture and its relationship with artificial intelligence.

1.    A very different kind of AI for agriculture

Ideas of topological vicinity, reinforcement effects between related units such as cellular automata, and intermediate “clusters” between the single unit and the field as a whole have led to the reappearance of a type of AI that had almost disappeared from the cognitive science landscape: the self-adaptive maps of Teuvo Kohonen.

At the moment, AI is almost entirely synonymous with “Machine Learning” and more precisely with neural network learning, supervised or reinforcement learning, i.e. the variants of the gradient descent backpropagation algorithm.

We cannot ignore the great scientific breakthroughs due to Deep Learning, networks with very large numbers of layers in supervised or reinforced mode. I have previously had occasion in this publication to praise AlphaZero[1], Google’s AI, which has amazed strategy games enthusiasts. Similarly, Deep Neural Networks (DNN) have made it possible to recognize handwriting or patterns in an image at industry-critical levels of reliability.

But it is reductive to class all AI under the same technology. Inference methods (fuzzy logic, Bayesian networks, game theory…) or other pattern matching techniques (genetic algorithms, support vector machines) are all included in the comprehensive field of AI technologies alongside DNN.

However, it is very useful to understand why one algorithm should be applied over another, depending on the field of application. There are good reasons why we should use Kohonen’s self-adaptive maps for agriculture, more than other techniques, especially DNN.

It is nice to finally see attention paid to the work of Teuvo Kohonen, a hard to define Finnish researcher, who had the courage to pursue neural approaches when no one believed in them anymore, a colourful personality, sometimes unfair in his unlikely loathing for mathematicians but with the strength of mind to bring up real questions with his provocative attitude, and in short the author of the most original algorithms among the cognitive sciences.

We will not go into the technical detail of Kohonen’s algorithms, as they are summarized in Wikipedia and related academic links[2]. We will simply try to convey his philosophy, and why it is closely related to an area such as agriculture and, more generally, to any ecosystem.

A self-adaptive Kohonen map has only one layer of neurons. This layer will represent the space of all variables of the observed phenomenon, respecting its topology.

A distance calculation algorithm ensures that neurons located in the same vicinity on the map represent vectors near the starting space, by competition between neurons that best respond to the stimuli of the observed space, and by selecting a winning neuron to specialize in the representation of this part of the space studied and by specializing its closest neurons in a coherent zone.

A Kohonen map can therefore be considered as a spacial projection of a very large number of variables on a smaller space that is easily viewable, but respecting all notions of proximity to the starting space. The algorithm gives mesoscopic properties to the map: each neuron is not an individual unit without any relation to the others: they are grouped by vicinity into “clusters” specializing in the representation of part of the phenomenon studied. 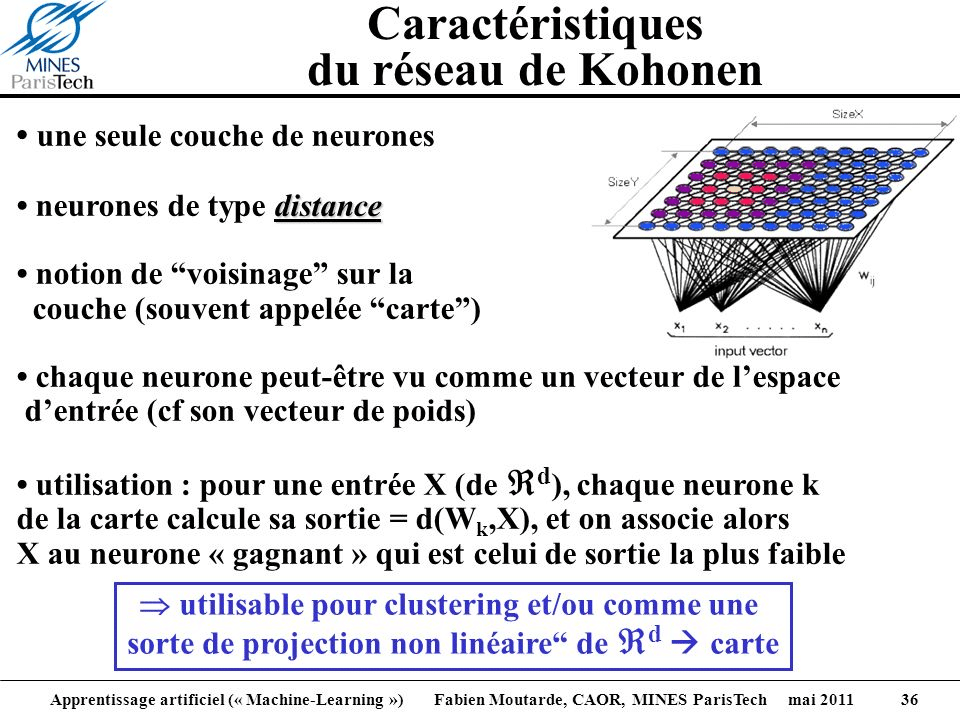 In the example of agriculture, the input space would be the spatial image of the field captured by satellite or drone, but each pixel of which would be associated with a complex state vector: spectral signature of the soil, measurement of soil composition at that location, presence of a plant at that location, biological constants of the plant, weather context variables at the time of observation, insect interaction variables at the time of observation, etc.

The observed phenomenon is therefore not a geometric field but a field of forces in the physical sense of the term, made up of complex state variables measuring both the state of the field at each position and the context in which it exists.  We should add that state variables naturally change over time: each capture by satellite or drone is at time t, it is the evolution of plant conditions, soil conditions and weather contexts and interactions with insects or the use of pesticides and fertilizers that interests us.

This temporal dimension can be added to the learning process by projecting state vectors onto discretised time intervals.  The state of the field at a certain plot at time t1 may therefore be similar to the state of another plot, geographically distant, but close in terms of biological status. This proximity will appear on the map and will enable measurement of changes and state propagation in the different plots.

It should be noted that Kohonen’s self-adaptive maps are heavily inspired by the actual mechanisms of the living world, much more so than DNN layered neural networks: the latter have demonstrated the presence of nonlinear discriminant optimization in cognition, not at all that real biological neurons act like a DNN.

Kohonen’s algorithms, on the other hand, although they represent only a very small part of the neuronal reality, are modelled on the cellular specialization functions found in living organisms, including the fact that the basic entities i.e. cells are grouped into local “clusters” which form a unit, specialising in the reproduction of a particular function.

2.    Agriculture and the induction of the living world

A very good example of the application of Kohonen maps is illustrated in the following study, on the evolution of winter land use in Brittany: Cf[3]. 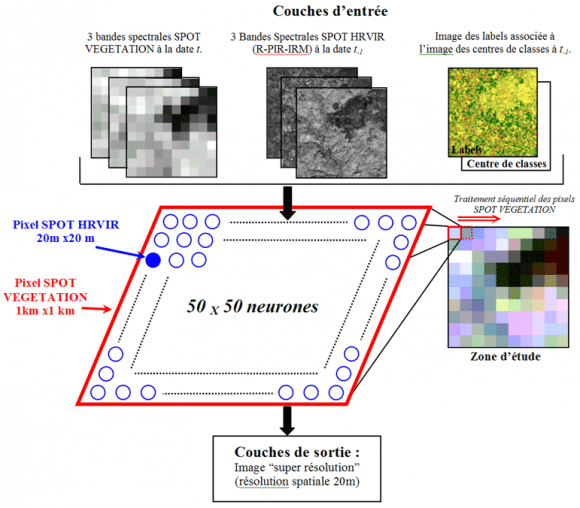 Kohonen maps allow photographs taken by satellite to be interpolated to supplement where time intervals are too wide, or where there is insufficient precision in spatial and spectral resolution, by intersecting accurate images taken at long intervals with less defined images captured more frequently.

Predictive models thus take into account the complex interactions between different plots: spread and contagion, both good and bad, are represented, making it possible to run a simulation and calculate the consequences of applying pesticides or ploughing a particular part of the field rather than another part.

The resurgence of Kohonen’s work in agriculture has lessons to teach us about the relationship between AI and the living world. “Traditional” methods of supervised or enhanced learning cannot be applied, because it would have to be possible to indicate what the “exemplary” result is in agriculture, and this is in reality still too complex a task.

Supervised methods are shown to best advantage in semantically closed games such as strategy games. Agriculture, because it deals with living entities, presents us with open realities, where the context can change as rapidly as the phenomenon being studied. For this reason, it requires unsupervised, inductive technologies using pure observation prior to modelling.

“AGR-AI” teaches us that the AI of the future should combine DNN and Kohonen maps in ways that complement each other: supervised and unsupervised learning, modelling and pure observation, extraction of key concepts using DNN, harmonization of these concepts taking into account the holistic nature of the living world.

Between narrow positivism and the fashionable phenomenon of techno-prophets trumpeting transhumanism, the true and balanced path opens horizons to new ambitions, but still retains a certain humility.

The 2020s: could they usher in the age of a pro-science Europe, free from fears and chemophobia?

Will European holidays soon be under Nutri-Score’s watch?

Why AI will revolutionise molecular pharmacology

In the September 2019 issue of Nature Biotechnology, a collective of scientists mostly from Insilico Medicine, led by Alex Zhavoronkov, CEO and founder of the company, published a landmark article.

In an increasingly fraught environment, where scientific fact is often superseded by political dogma, The European Scientist aims to set the record straight. Publishing in three languages (English, French and German), TES gives a voice to researchers and experts looking to explain the ins and outs behind the most seemingly complex scientific debates in Europe.